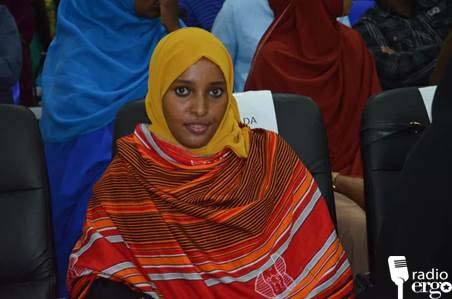 The youngest female deputy mayor has been elected to Badhan town council in northern Somalia’s Sanag region. Hawa Mohamud Farah, 26, was elected to succeed the previous deputy, who was also a woman.  Nine of the 28 members of the new council are women.

Deputy Mayor: I was born in 1993 in Badhan town in Sanag region. I did my primary and secondary education at Furqan School and thereafter proceeded to study business administration at the East Africa University in Bossasotown. I have worked as a social worker with humanitarian organisations including ACTED, WFP, and Adeso.

Ergo: You were elected as deputy mayor and you are a young woman. What did it take to win the confidence of the council?

Deputy Mayor: Well, I am very happy. I invested a lot of effort in this andI’m pleased that out of 28 councillors, nine of us are women. I was competing against four candidates, all men. I am very happy that I defeated all four men to take up the position.

Ergo: You said you have been eyeing the position for a long time, what made you think about it?

Deputy Mayor: Yes, it is true, it has been on my mind for a long time to get into a position of power to serve my region, country, and my location. I was motivated by the need to improve the standards of education, to establish more mother and child health posts and equip them. There are already some health facilities but they need to be upgraded. Badhan has no fully equipped MCH.

Ergo: What are your priorities now?

Deputy Mayor: Our first priority is full cooperation among the councillors and to win the trust of the people of Badhan. That will make things work. What we want to do includes reforestation and beautifying the district. Our work will not only be in Badhan, but all areas under it will be covered in our development agenda.

Ergo: What do you want to achieve for women?

Deputy Mayor: I want to be a role model for women. Women need the capacity to participate in politics. I pledge that I will train them. I will show them their potential and build their capacity. Women are the backbone of the land and play a very important role in the development of our society.

Ergo: How did your family and the public react to you standing for the post?

Deputy Mayor:  They were very encouraging. The confidence of my people in Badhan is what has brought me to this position.

UK And Kenya Unite In Fight Against Al-Shabaab

UK And Kenya Unite In Fight Against Al-Shabaab