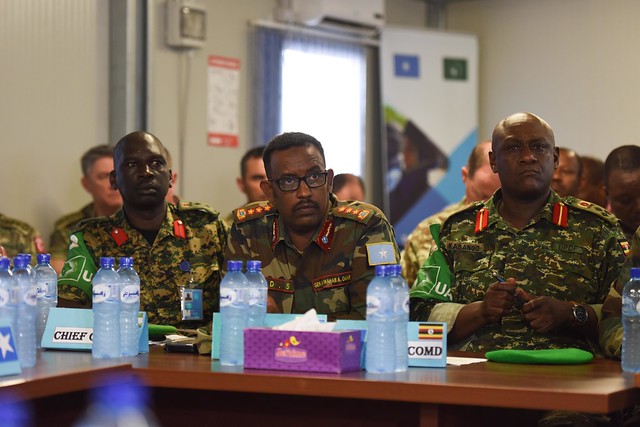 Commanders from African Union Mission in Somalia (AMISOM) have convened in the Somali capital, Mogadishu to discuss the mission’s strategy.

In a three-day meeting which kicked off on Friday, the commanders will have a discussion on progress to implement the

Concept of Operations (CONOPs) during the last three months.

The commanders will look for ways to review and evaluate the implementation of the mission’s exit strategy.

CONOPs provides a framework to guide the implementation of AMISOM’s gradual transfer of security responsibilities to Somali security forces and exit from Somalia.

The plan will guide the AU mission’s military activities and operations for the 2018-2021 period.

Head of AMISOM, Francisco Madeira, opened the meeting called for improved coordination and encouraged commanders to ensure the mission meets its objectives.

“We committed to undertake certain operations, and it is important that we see the results of those operations,” remarked Ambassador Madeira.

Ambassador Madeira commended the SNA and AMISOM troops for liberating Sabiid, Anole and Bariire, highlighting this as a milestone in efforts to restore peace and stability in Somalia.

Lt. Gen. Tigabu noted that joint operations in the Lower Shabelle region had positively impacted on the security in Mogadishu city. “It has significantly reduced incidents of Improvised Explosive Devices explosions and mortar attacks, which Mogadishu had been experiencing,” Lt. Gen. Tigabu remarked.

Halqaran - July 27, 2021 0
The European Union (EU) and its partners cut by half the budget for troops fighting Al-Shabaab militia in Somalia after a secret partial withdrawal...

America may be creating a power vacuum from Somalia to Afghanistan